Cancer and baseball and a passing comment… the connection

Yesterday was an interesting day. Most of it spent at the ball park with an incredible group of parents and friends watching our boys play in a winter baseball in a tournament. It was a hard day for the boys. And probably an even harder day for the coaches. Frustration is a word that comes to mind. We lost both games, the second one badly, as the boys struggled to keep their focus with each scoring run by the other team. 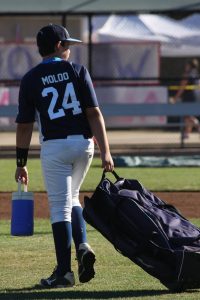 Later in the evening, Alexander and I visited friends at an annual holiday party. Visiting, laughing and playing the drums (yes, I did, along with others) –my son was mortified, but dang it felt good – was what we both needed, especially after the past week.

You know how you can be engaged in something and someone makes a passing comment, shares a thought, and you realize you just heard the missing thread that draws seemingly unrelated feelings together? I love it when this happens. I feel like I’ve been let in on a secret.

This week our daughter came home from her first quarter at college, our sons were wrapping up their school week before the holiday vacation, and I had my college exams to give until just a day ago. And then my husband, midweek develops sudden high fevers and he is admitted to the hospital during our youngest son’s school holiday show.

There the four of us were. My youngest son on stage uncomfortably, but adorably singing, “We wish you a Merry Christmas!” And their Dad, yet again, at the hospital. A fair estimate I have is this was probably somewhere around his 30th hospital admission in the past four years. As I sat listening to Christmas carols being sung, I wondered how many other families would have continued on the path of the evening or would they have chosen to abandon a holiday tradition to be at the hospital with their spouse, their father, their loved one. He was in good hands. Not much we could do during this hospital admission. We visited him after the show. It’s the high wire act we live, keeping life as normal as possible for the children and living with cancer’s chaos. I accept that I may never be able to articulate the disconnect I feel at times when my life is this disjointed. There are many moments that seem almost surreal.

Now, for the thread. A friend at the holiday party, one I haven’t seen in a while, said she’d heard my husband was in the hospital and commented, “You must be used to it by now. Probably no biggie.” She meant kind words. However, they stuck and they stung. I wanted to shout, “Nobody gets used to it. As a matter of fact, with each admission the kids and I relive a flood of emotions of all the previous admissions like a bad dream.” But, I spared her.

The truth is, as hard as it is for the patient to be admitted, it’s pretty darn trying for the family. I’ll use an example I was given some time ago. When someone narrowly escapes a fire in a burning building, their mind remembers the experience and emotions elicited in order to use the information in the future. It is part of our survival instinct. The next time that individual smells smoke in a building, they are going to respond very differently than the person who never experienced being in a burning building. In a matter of seconds, feelings of needing to escape are going to flood the experienced individual because their mind had the previous experience to draw on.

When a loved one is admitted to the hospital, it is probably one of the most stressful events a family can experience. If they are lucky enough, the admission goes well and it’s a very long time before it ever happens again. In our case, as with many families dealing with cancer, hospital admissions are common but no less traumatic with each admission. I argue they actually build on intensity because of the previous experiences. In our case, we have been told my husband wasn’t going to make it on two separate hospital admissions. We have shown up to his room to find him having been suddenly moved to the ICU. We have visited him in isolation where we have had to dress in gowns, cover our faces, and wear gloves to just touch him, for 88 continuous days. Those experience carry incredible weight with my children when they hear, “Dad has to go to the hospital.” What I’ve noticed is how most respond to us as if we should be used to it. And we just aren’t. I doubt we ever will be.

What I have learned from my children and their sports, especially baseball, is when there is a loss sometimes it’s best to just let it be. Take some time to process the feelings. Kind words from another can help, but they won’t necessarily ease the pain. Getting back to practicing and moving on to the next game is sometimes the best thing you can do. Trying not to let the past experiences influence your perceptions of the current, but approaching as much as possible the new game with a clean slate. A fresh start.

The second half of the tournament is today! Good luck boys!

My husband came home Friday evening after only two days in the hospital. They could not find the source for his fevers. More tests will be run before and after Christmas.

Every few months friends or family will ask for suggestions on how to support someone with young kids whose whose spouse has been diagnosed with cancer. It's unnerving the number of young families dealing with a parent newly diagnosed with the disease. Recently, a cousin … END_OF_DOCUMENT_TOKEN_TO_BE_REPLACED

Chronic illness can be a great place to compete without showing it. Who's calling the shots, the patient or the caregiver? The ill spouse or the well spouse? There is terrific power in each role - the caregiver and the patient. If the caregiver overplays their role, the ill … END_OF_DOCUMENT_TOKEN_TO_BE_REPLACED